Emergency Stop and The Use of Mirrors 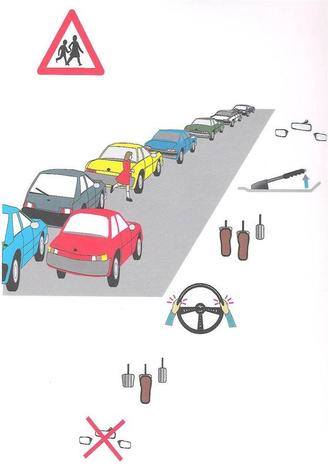 The ability to make use of the interior and exterior mirrors at the correct time.

* Where Do I Do The Briefing?

The mirrors you do at the test centre...The emergency stop at the site

Not making sure the pupil checks his mirrors when he should!!

You need to be watching his eyes and not his head. Its not if his head moves

But what he looks at!

On the controlled stop ... letting him drive off without proper obs.

Use of Mirrors: Emergency Stop

Use of the Mirrors:

The PDI should deal with the mirrors from a general aspect of the
driver’s seating position and mirror adjustment, and the importance of rear vision at all
times this involves regular use of all mirrors during general driving.

In addition, they should refer to the possibility of “blind spots”; examiners need to be wary as to not to force
a change in lesson plan by simulating move off faults. Mirror faults should be of a general
nature and not so that a lesson on a different subject may be suggested.

The PDI should explain what happens in any emergency stop and how
it is brought about; points to be covered are the importance of quick reaction; appropriate
use of the foot-brake and clutch; avoiding locking the wheels, and correction of skids.

They should also be expected to make some reference to the dangers involved in stopping
in an emergency and to the need to avoid such stops so far as possible.

NB: Anti-lock braking systems (ABS) are fitted to an increasing number of vehicles.
Examiners need to know whether the vehicle is fitted with ABS. Check the warning lights
on the dash when starting the engine.

Some ABS systems require a variation in the application of the clutch and footbrake
when braking in an emergency.

Examiners should bear this in mind when assessing the  PDI’s instruction regarding use of footbrake and clutch.